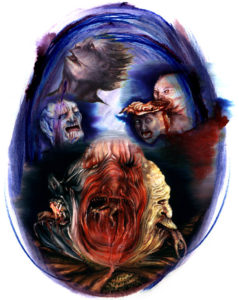 The best part of living in Hell is you can see Eternity. I guess it’s the same for Purgatory and Paradise, but I wouldn’t know about that. Wouldn’t mind a shot at it though . . .

Anyway, scanning Eternity isn’t for everyone here, but I’ve got the knack. I can look at that confusing continuum and zoom in on the detail and boy, talk about too many channels of television. It’s not just time, it’s space too. They’re connected, you know. So you have to be able to dial space and time coordinates together, it’s not everyone’s cup of tea, but I can do it. That other Ira, he tries it but I’m better.

But, I digress, because I wanted to share another diatribe from the Earth space-time continuum. I wanted to express my profound lack of respect for people who used an English idiom that was often shortened to “go to Hell” but is properly rendered as “You can go straight to Hell.”

They think they are being dismissive and condemnatory, but in alternate reality they are being generous. As those you will meet along the Hellbound road soon learn going to hell isn’t a curse, it’s an adventure. Old Dante took the garden path and gave everyone the grand tour of the circles from the Abandon Hope Gate to Cocytus lake. Today, well whatever passes for the current time, Lucifer floats free above an Infinity Pool and gazes into the universe his fall created.

It’s grand because it’s from the hillside above that I sit and slice into the continuum, picking and choosing as I like so I can share these diatribes with you. So if you are one of those who like to tell people to go to Hell, well you might want to consider our current adventurers who, unlike the Dante of yore, literally took a road from the Vatican that led straight to the heart of Hell.